Photo: Crops being grown on the new campus are helping to keep our orphan home pantries fully stocked with fresh vegetables and food supplies, with excess produce being sold at market to generate further funding for our programs.

Our native team recently acquired 5 acres of new land outside the city which will be a new campus for future expansion — we are waiting on funds to build a new orphan home for the children. It will be our primary orphan home with many improvements and much more space. In the meantime, our team has been preparing the land for future construction by clearing the area after some trees were removed, making the way for the new home. Our team also recently planted mustard leaves, spinach, eggplant, chilies, cabbage, and bitter melon on the new land, and we look forward to a bountiful harvest soon as well as the continuation of a flourishing garden on our new campus. In addition, in June we are planning to prepare our 14 acre rice farm for the upcoming rice paddy crop — please pray for a good rainy season which is needed to nourish the land for planting. The vegetables and the rice will provide key staples in the diets of our 120 orphans and the staff in our 6 orphan homes.

In other good news, all of our Myanmar orphans, who are in the 1st through 10th grades (ages 6-16), completed their final exams in February and March. They diligently prepared for these exams by studying and receiving tutoring for their native Burmese language, English, geography, history, math, science, biology, and physics during the past semester at the different local schools where they are enrolled. All of our students passed their exams with good scores and we are very proud of their hard work. 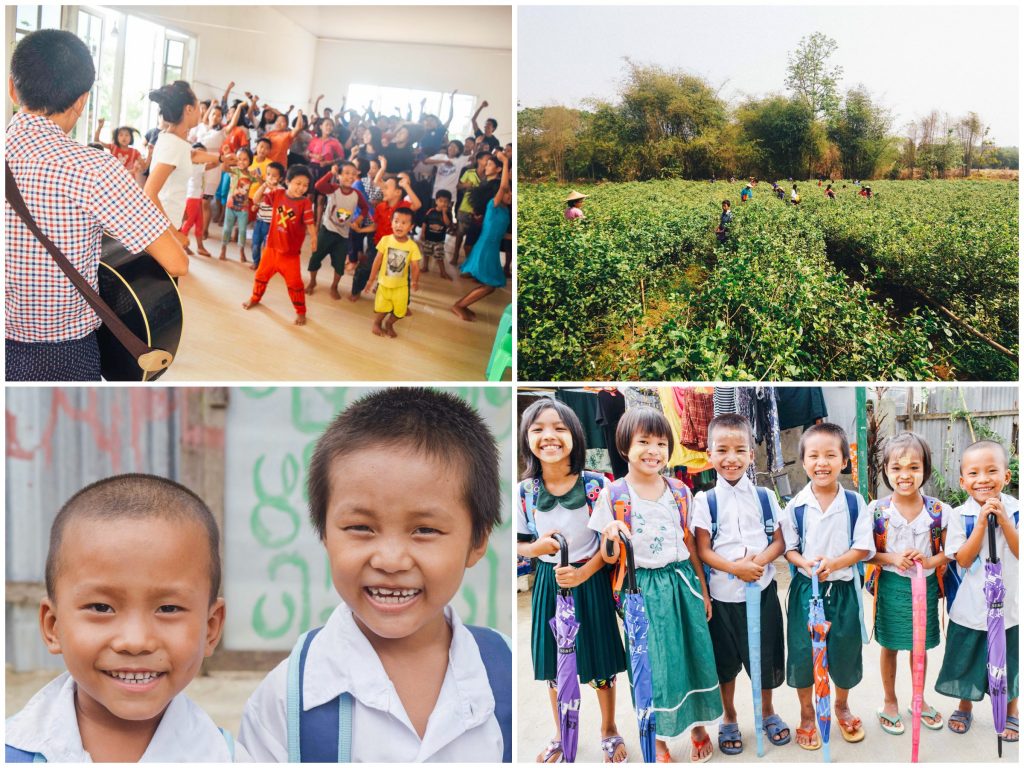 Now the children are enjoying a relaxing break before school resumes in June — they are having fun playing football, playing guitar and singing songs, watching movies, and cleaning and washing their clothes without the pressure of having to study for their classes. And thanks to your support, our native team was able to hold a week-long children’s outreach camp in April to coincide with the local Water Festival, which celebrates the Burmese New Year. 75 children (divided into 3 groups: 2-8 years old, 9-14 years old, and 15-20 years old) from our orphan homes and the local church attended this camp, where they enjoyed playing games such as Simon Says, Hide-and-Seek, and football as well as jumping rope, drawing, painting, and Bible memory and singing competitions. Our team also served the children a delicious meal of pork, fish, chicken, watermelon, and lemon and orange juices.

Today we’re happy to share the story of Maung*, an eight-year-old boy living in one of our orphan homes:

Maung was born in a remote village in the Chin state, an area of western Myanmar that borders Bangladesh and India. The state has few transportation links and is ranked as the poorest of the entire nation. His father died of an illness when Maung was only one year old. The healthcare system in Chin state is deplorable, with only 656 hospital beds in 22 hospitals serving a population of almost a half-million residents. Healthcare is supposed to be state-sponsored but in reality, residents end up being required to pay for the medicines needed to treat them. Under these extreme circumstances with no affordable access to medical attention, Maung’s father died at an early age, leaving Maung’s mother to care for him, his older brother and two older sisters. Although his mother tried hard to provide for the family, it wasn’t enough and Maung wasn’t able to begin primary education and was malnourished. By an act of divine providence, Maung’s uncle met our Myanmar director during his visit to Chin state two years ago. His uncle told our director of Maung’s condition and asked if he could be enrolled at one of our orphan homes. Thanks to recent improvements at our main orphan home, our director was happy to tell Maung’s mother and uncle that we had space to take him in at the age of six. Since that time, Maung has been receiving three nutritious meals daily, is in great health, and has successfully completed grade one of primary school. He says his favorite subject is Burmese, he enjoys group singing time, playing group games in the courtyard of the home, and says that his favorite foods are apples, bananas, and fish.

We are grateful for your prayers and generous support which makes a life-changing impact in the work that we do for these children and our native teams.

Take Action: sign up for a monthly donation to help sustain our operating budget | shop Amazon through this link — as an Amazon Associate we earn from qualifying purchases

Take a Closer Look: view more photos from this project and others

* Story names are changed to protect our program participants.