Photo: Girls from our orphan care program are happy to be re-enrolled for another school year, seen here proudly wearing their new uniforms.

There has been a lot of bad news coming from Nepal since the devastating 7.8 magnitude earthquake that struck the region on April 25, 2015, which killed more than 8,800 people and injured more than 23,000. Hundreds of thousands of people were made homeless when entire rural villages were flattened across many districts of the country. A second major earthquake with a 7.3 magnitude occurred on May 12th causing significant loss of life and more destruction to homes, historic buildings, and major roads in Nepal. Rebuilding Nepal has not been easy. Much of the terrain is forbidding, there are still frequent aftershocks, and Nepalis are divided by caste, religion, and language. Disasters on the scale of last year’s earthquakes have left the hearts of the Nepalese people badly shaken.

To add to this misery, Nepal suffered from a paralyzing economic blockade that lasted for several months due to lowlanders with close ties to India, who feared that constitutional amendments would reduce their political clout. They protested by blockading the southern border, blocking the main points of entry for goods from India, such as fuel, cooking gas, and vegetables, thus leading to crippling shortages of these items in Nepal. The disruption ended in February, but fuel remains scarce in parts of Nepal. In Kathmandu, the lines to receive gasoline are often an hour long, electricity is available only about half of the time, and inflation is in double digits.

However, today we are thankful to bring some hopeful news in the midst of much despair and struggle. We recently planted corn at our farmland, and with recent rainfall we look forward to a bountiful harvest in October or November. This is very encouraging as we are adapting to the effects of the earthquake, such as losing our water well, by trying different crops that flourish only with sporadic rain showers. We are also raising 30 goats, which are valuable assets as they are raised for stockbreeding. 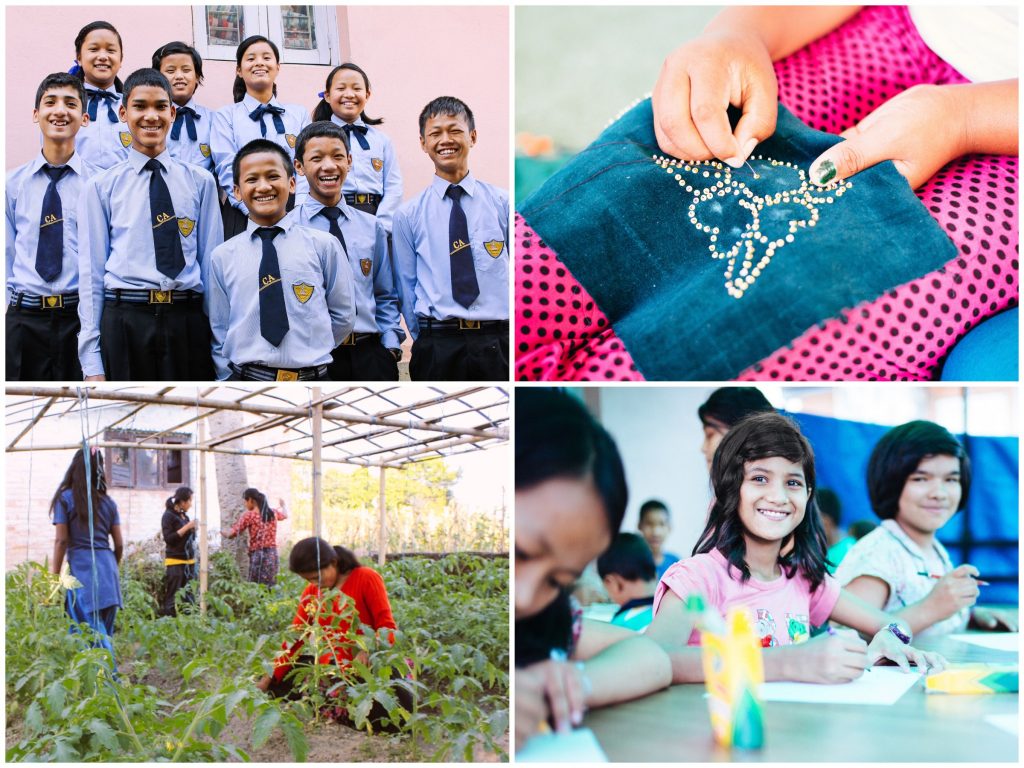 Photo inset: (Top-left): Children from our orphan home are excited to be going back to school. (Top-right): A girl in our rehabilitation home practices her sewing skills as part of her coursework. (Bottom-left): The garden at the rehabilitation home provides nutritious food for the girls. (Bottom-right): Girls in the orphan home work together on their homework during study time.

We also recently planted eggplant and bell peppers in our garden at the ‘She Has Hope’ rehabilitation home. The garden produce is in addition to our off-site farmland, but our garden at the rehabilitation home provides us with quicker access to nutritious, organic food, which was proven especially true during the blockade. The rehabilitation home garden is another example of hope and growth in the midst of struggle and setbacks. The girls enjoy seeing how their work in the garden comes to fruition as they tend to and care for the plants. After the growing season they are able to enjoy the fruits of their work as they use their own ingredients in their cooking classes and surprise each other with their culinary creations. This reveals to them the joy that they can experience in their own creativity as they serve one another.

In other good news, we recently rescued 11 Nepalese girls (average age 18-22) from the perils of human trafficking with the help of our sister NGOs who informed us about the girls’ dangerous situations. Some of the girls were rescued from as far away as Mumbai, and some were rescued out of deceptive ‘dance club’ establishments in Kathmandu. They were lured with the false promise of good jobs in the city, but when they arrived to their destinations, they realized that they were actually hired to work at disreputable dance bars. Most often going without pay and threatened with death if they tried to escape, girls trapped in these types of operations are held against their will and awaken in a nightmare of modern day slavery. Thankfully, all of these girls are now safe, healthy, and happy living in our rehabilitation home where they are learning to make various handmade crafts. Most recently their teacher has introduced them to the skill of crafting a new style of women’s handbag made of beautiful Nepali cloth. Many of their creations are sold online at the She Has Hope crafts shop where all of the profits go toward the girls’ rehabilitation.

In other news, our children from the orphan home started back to school in late April — we have 23 students enrolled this year. They are studying math, science, their native Nepali language, English, social studies, and computer. We have already purchased the school uniforms, books, and school supplies that the children need. But with your support, we hope to also provide them with new shoes and clothes for summer, umbrellas and raincoats for the monsoon season, and new bed sheets and mattresses. Focusing our efforts on getting the children into school is a key component in breaking the cycle of extreme poverty, and gives them great hope and an opportunity to change their lives.

Take Action: shop for the girls’ handmade crafts online | shop Amazon through this link — as an Amazon Associate we earn from qualifying purchases