Photo: As all cooking gas supplies have been cut off, our native team is preparing all meals on makeshift wood-burning stoves.

Today we bring you a critical update from our native team in Kathmandu, who have been affected by an economic blockade since September 21st, unofficially imposed on the people of Nepal by their neighboring country of India. Protests have blocked the main points of entry for goods from India, such as fuel, cooking gas, medicine, and vegetables, thus leading to a crippling shortage of these items in Nepal. The crisis began when residents of Nepal’s southern plains bordering India, who are known as Madhesis, began protesting provisions of the country’s new constitution. The Madhesi groups are unhappy with the way the new constitution demarcates states, saying that it will leave them underrepresented in the federal government. They want all plains districts in southeastern Nepal combined into a single state. The Madhesis share strong socio-cultural ties to the neighboring Indian states of Bihar and Uttar Pradesh, thus India has expressed concerns over the violent protests and asked Nepal to take Madhesi interests into consideration. India is supportive of this people group and their plight and therefore this is the root of the blockade.

With an expected harsh winter, Nepal is looking at a serious humanitarian crisis. Nepal says the blockade is aided by India, a charge that New Delhi denies. However, Nepal’s charge is not without any merit. Ever since September 21st, India’s border guards have reportedly been instructed to “thoroughly check” every truck that enters Nepal. The time-consuming physical check of every truck has caused a disruptive pile-up on the border. India has also, inexplicably, detained Nepali oil tankers and issued an advisory to its own oil tankers that they should enter Nepal at their own risk. This has effectively discouraged Indian oil tankers from crossing over into Nepal. Hospitals and schools have also been hit hard due to a shortage of fuel that is used for heating. The hardest hit are the poor and the 200,000 families who lost their homes in the earthquake earlier this year — they are still living in temporary shelters. 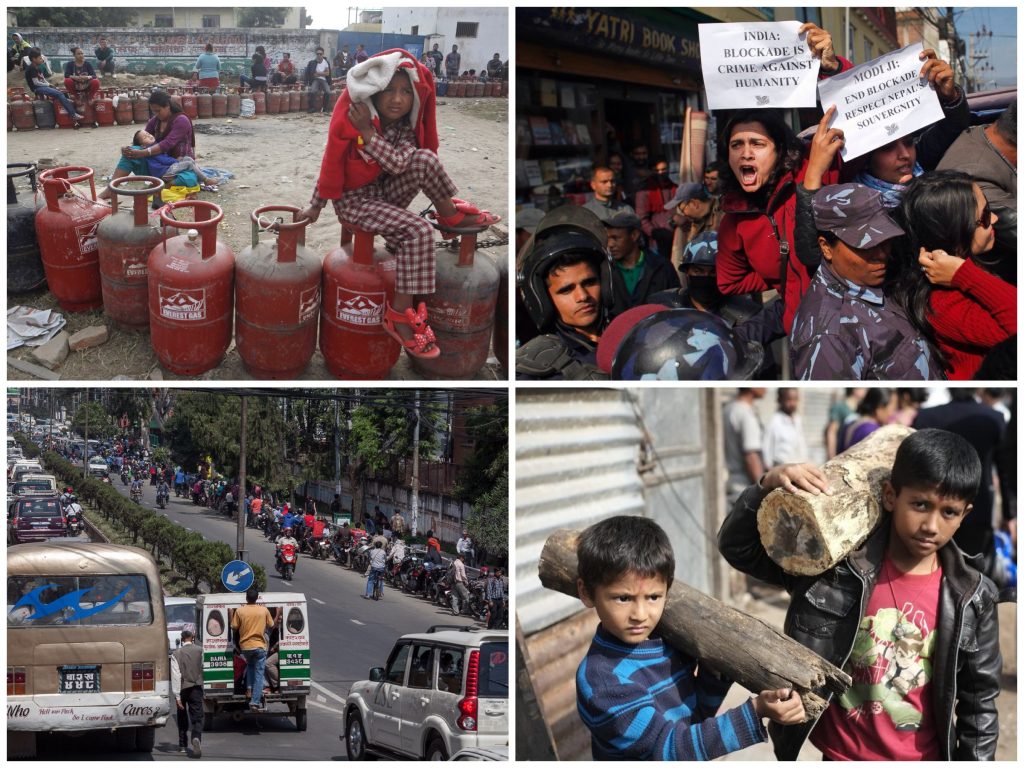 As the economic blockade has worsened, it has struck a hard blow to our native team. We are not able to receive materials to train the girls at our rehabilitation home; there is no fuel and transportation to go out and conduct our trafficking awareness classes in the local villages and at the border; and all dry rations, vegetables, and fruit have become very expensive. And without access to cooking fuel, our team is having to utilize makeshift wood-burning stoves to cook all of the children’s meals. No one cooks with electric stoves in Nepal because electricity is too unreliable, but we look forward to our team being able to resume cooking on their normal gas-burning stoves. In addition, we are seeking donations to cover shipping costs for craft-making materials that we will ship to Nepal since most of our usual supplies are completely unavailable right now. Therefore our craft-making skill development classes at the She Has Hope rehabilitation home have mostly been suspended for the time being.

As Nepal is surrounded on three sides by India, it is overwhelmingly reliant upon imports from India, including much of its food, consumer goods, and 100 percent of its fuel – aviation fuel, petrol, diesel, and cooking gas. Nepal receives 60% of all the imports and nearly all of its oil and gas from India. Due to the current economic blockade, the entire Kathmandu valley is out of cooking gas and fuel — the disruption to deliveries have rippled through Nepal’s economy. A lack of gasoline means that there are fewer cars on the streets and long lines for rationed fuel. The price of food and other market goods has elevated. The Nepali government has been making an effort to bring its imports from China, Nepal’s northern border, which runs through the Himalayas. China has already given 1.3 million liters of fuel through the Kerung-Rasuwagadhi border. The rugged terrain of the mountains makes shipping more difficult, but if China continues to help, we are praying that the shortages will end soon.

We look forward to reporting back about the end of the economic blockade, and the normal flow of things returning to the lives of our girls, our orphans, and our native team. Thanks for your faithful support and the generous contributions from our donors — every little bit helps to give our girls and orphans a life full of joy and hope.

Take Action: shop for the girls’ handmade crafts online | shop Amazon through this link — as an Amazon Associate we earn from qualifying purchases